My way around the Sacred Waters Way 2021

Sunday September 5th was a cloudy, foggy day in South Devon. Isabel and I left Totnes for Ashprington around 2pm. We met the rest of the group at Saint David’s church in Ashprington, close to the local pub, The Durant Arms, where the last day of a 3-day beer festival was taking place. Quite a contrast to what we were about to do: a pilgrimage to Saint Peter’s church in Cornworthy. A walk led by Isabel and Sam, but mostly by silence and water. 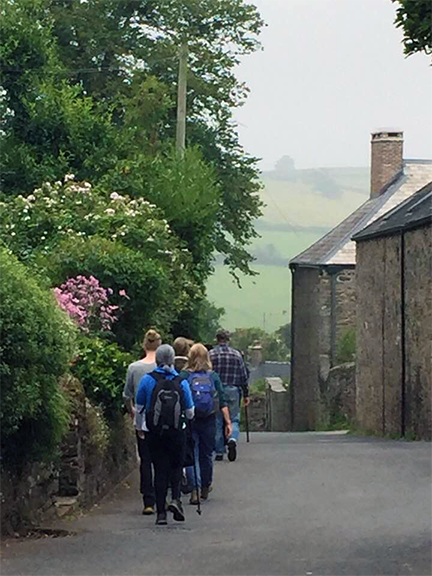 The pilgrimage was part of the ‘Sacred Waters Way 2021’ which is a long walk from Dartington to the sea, travelling along the river Dart, split up into several smaller pilgrimages. They happen on the first Sunday of each month from May to December, this one being the fifth, but my first. In 2022 the pilgrimages will continue upstream from Dartington to the source of the River Dart, so that the whole of the river will be explored. Each time, we carry a Charter with us–the Charter for the River Dart at Dartington, the UK’s first River Charter and a prototype for other rivers and communities.

There were twelve of us, everyone fully equipped for a walk that would take about three hours to complete. Hiking boots were strapped tightly, water bottles were filled and minds were open.

Sam, the pilgrimage organiser, is an interfaith minister, founder of the River Dart Wild Church. She reminded us that this pilgrimage was dedicated to the journey, not the destination: it was a peregrination. Isabel, co-founder of the Bioregional Learning Center, co-creators of the Dart Charter, had devised today’s walk to be in four parts: flow, container, focus and dissolving. She invited us to flirt with water and become water, to see what water can teach us about how to live in this time of uncertainty. She started us off by saying: ‘Water is never lost, it is always on a journey to join up with other water. Water is in relationship with everything. It teaches us to think like a system.’

The walk patiently led us along the Dart, stopping several times along the way. To process everything we had seen and to give ourselves the time to think about all the stimuli and incentives nature and the river gave us. Especially sites where water was abundant–these were the ones that got our attention. We were free to think what we wanted to think, sometimes guided by a poem or a small piece of text, for example from the Charter, that Isabel kindly read to us. 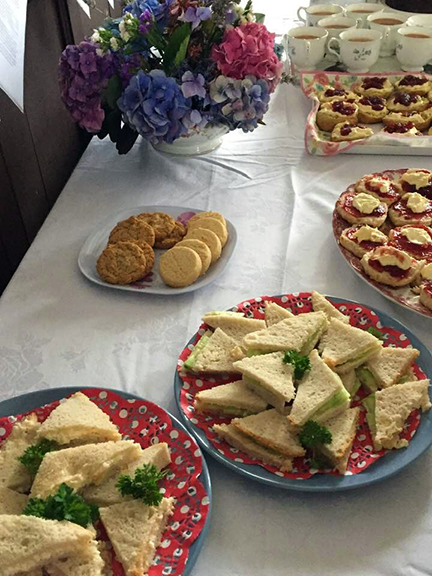 It was a peaceful journey in a beautiful part of Devon. The closer we got to our final destination–surprisingly well-arranged cups of tea, scones and cucumber sandwiches at Saint Peter’s church–the more we were encouraged to share our thoughts. We sat in a circle on old tree trunks around a previously-used campfire site. We spoke when we wanted to, but not pushed if we did not want to.

We commented on the way the river moves, the way its surface sparkles and how it is made up of millions of small droplets, yet forming a whole. We noticed that we humans are made up mainly of water, like Isabel’s and Sam’s t-shirts, that read ‘64% Dart’, and that everything in nature is. That our planet would look a lot more like Mars, just dust and rock, without water and that is a very generous resource. It actually reminded me of the Christopher Nolan film Interstellar, which I had just watched the week before. In search of another planet that would be inhabitable by humans, they called water ‘the juice of life.’

I remember thinking that I have always looked at water in a rather scientific way. For instance, that it moves in a certain way, because it moves from high potential to low potential. And that it reflects, because it changes the direction of the light. However this was a whole, new, actually more meaningful and open minded way of looking at it. I believe it reminded us all to not take water for granted and to appreciate, cherish and conserve it.

After a last, short climb we arrived at our destination and after a short moment of blessing, the tea and sandwiches were consumed. An optional Vespers, a ceremony of evening prayer, followed, in which the River Dart Charter was blessed and handed over to the community. It concluded a wonderful day of walking, talking and thinking. With slight blisters on my heels I could not have been happier when one of the kind people from the pilgrimage offered to give me a lift back to Totnes. In the car I contemplated whether I would be able to remember the walking route.. And whether I would be part of the next pilgrimage on October 3rd.

This website uses cookies to improve your experience while you navigate through the website. Out of these, the cookies that are categorized as necessary are stored on your browser as they are essential for the working of basic functionalities of the website. We also use third-party cookies that help us analyze and understand how you use this website. These cookies will be stored in your browser only with your consent. You also have the option to opt-out of these cookies. But opting out of some of these cookies may affect your browsing experience.
Necessary Always Enabled
Necessary cookies are absolutely essential for the website to function properly. These cookies ensure basic functionalities and security features of the website, anonymously.
Functional
Functional cookies help to perform certain functionalities like sharing the content of the website on social media platforms, collect feedbacks, and other third-party features.
Performance
Performance cookies are used to understand and analyze the key performance indexes of the website which helps in delivering a better user experience for the visitors.
Analytics
Analytical cookies are used to understand how visitors interact with the website. These cookies help provide information on metrics the number of visitors, bounce rate, traffic source, etc.
Advertisement
Advertisement cookies are used to provide visitors with relevant ads and marketing campaigns. These cookies track visitors across websites and collect information to provide customized ads.
Others
Other uncategorized cookies are those that are being analyzed and have not been classified into a category as yet.
SAVE & ACCEPT